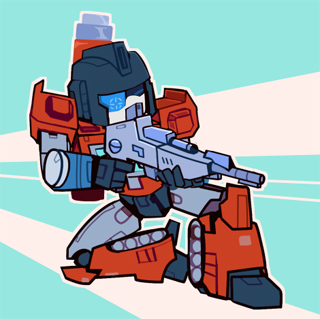 I was fortunate enough to be able to participate in the two tournaments that have been run prior to the May 22nd release, VectorSigma’s Alpha Trion Tier Presale Championship and the OCTGN Corona Cup 3, and wanted to give some insight into the bots that I saw popping up repeatedly across both tournaments. I’ll also go over a few strategies or card choices that I believe can help when playing against them. Finally, I’ll give an updated Sky Bull list having played it in both tournaments, and managing to win the Corona Cup with the same list I covered in last month’s article. 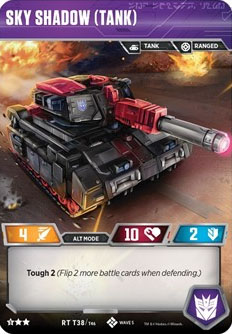 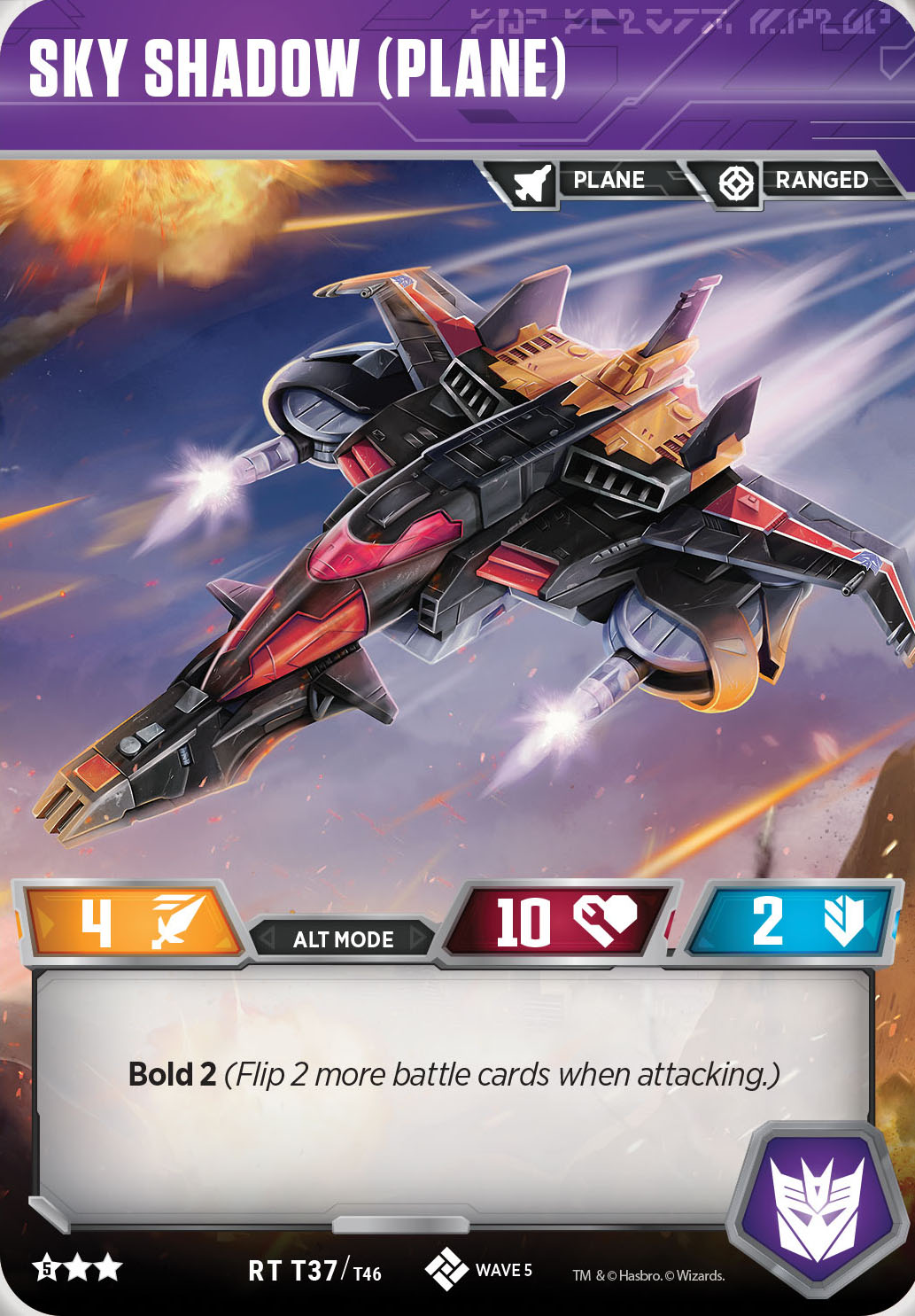 [[Sky Shadow Elite Warrior]] - This bot has been as good as advertised. Him and his parts have popped up with multiple partners in aggro and defensive shells. The amount of value for the 15 star investment has just been too good to pass up. Cards like [[Peace Through Tyranny]] are off the charts powerful with him since you combine into 8 attack, Bold 2, Pierce 4 character that lightning bolts an Autobot when he comes into play. After you presumably wipe out whoever you just decided to attack, you get another turn if you played the [[Peace Through Tyranny]]. Even when you manage to KO the combiner, [[Ominus]] pops off with Pierce 4 and is ready to deliver some hurt.

What can we do against the mechanical embodiment of death and destruction? The best thing to do is to force the parts to combine on your terms. The ideal scenario is to KO one of the parts outside of combat to force the combine, and then attack it, hopefully packing a  [[Grenade Launcher]] or [[Energon Axe]], to finish off his remaining health before he’s able to swing at all. Another tip, if going first, is to attack into the Sky Shadow piece that it looks like your opponent would want to attack with first. This is usually [[Sky Shadow (Plane)]] in aggro and [[Sky Shadow (Tank)]] in defensive builds. This can force your opponent to have to attack out of their preferred sequence. If they attack with the piece that is already damaged, you have a shot to steal an attack by knocking it out and forcing the combine before the other part gets to attack. 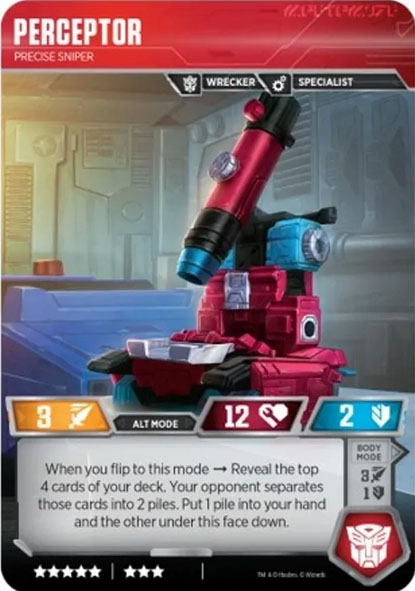 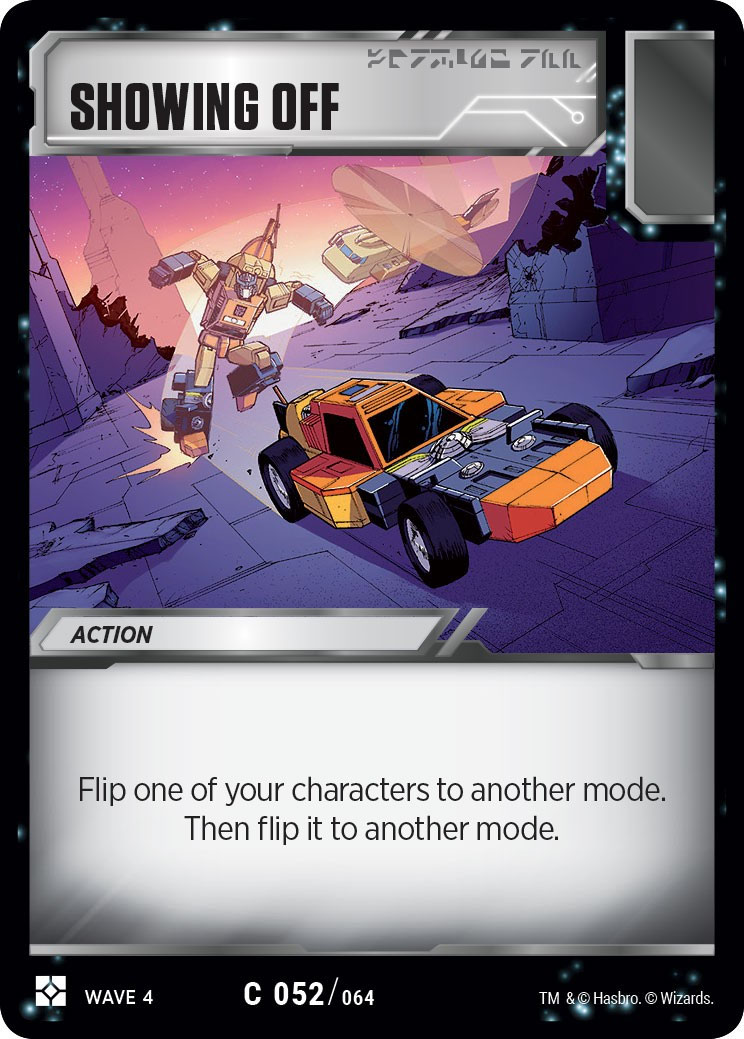 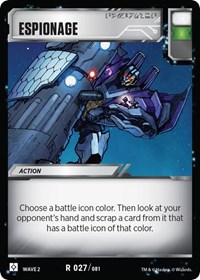 [[Perceptor Precise Sniper]] - The combination of this bot and [[Showing Off]] has been a force. He is constantly building his attack while drawing almost whatever card is needed at the time. The amount of cards he allows you to see lets the decklist have more options. You can get away with non-green pip 1 of’s and 2 of’s since you’re more likely to consistently see them.

How do we fight the model of consistency? Reading the board state is more important than ever when playing against [[Perceptor Precise Sniper]], you have to know what cards you don’t want to give your opponent. I don’t believe there will always be a good answer to how the piles are split. A basic one is if 2 actions and 2 upgrades are flipped, then keep them split by card type. This is what I usually do, if possible, the first time [[Perceptor Precise Sniper]] flips to draw. Another option is to incorporate more hand disruption. Cards like [[System Reboot]], [[Espionage]],  [[Counterespionage]], and [[Fog of War]] can be used to limit their hand size and disrupt whatever plan they were crafting. 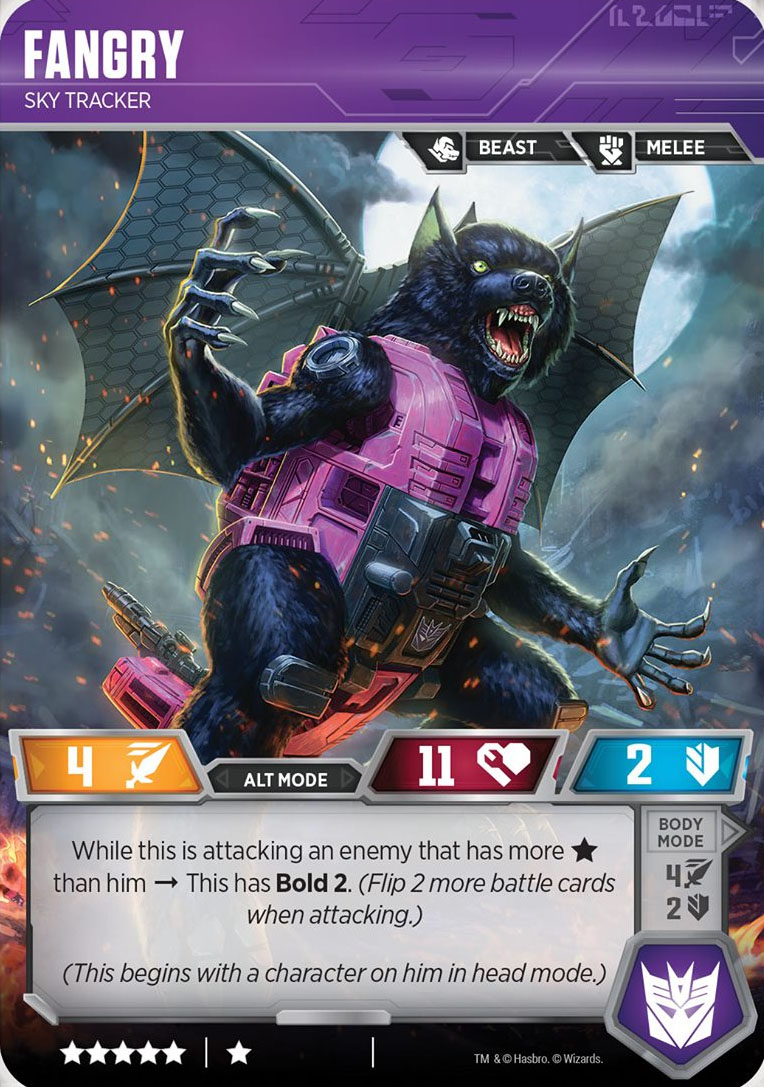 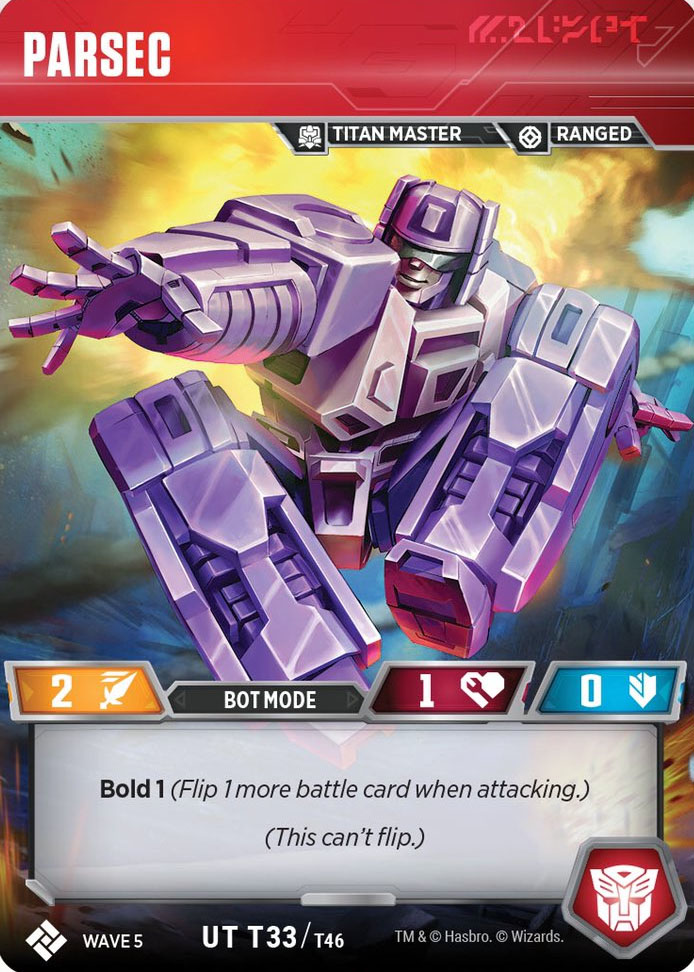 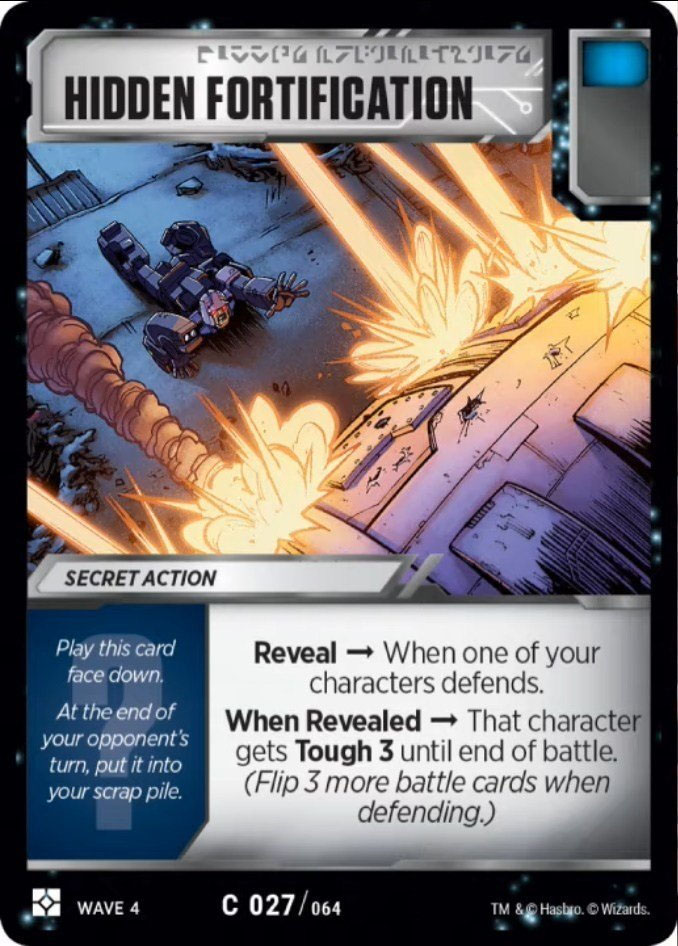 [[Fangry Sky Tracker]] - Usually paired with [[Parsec]] and hitting for Bold 3 into the biggest bot on your team. His 11 health and 2 defense also give him a chance to stick around for a second attack. He does exactly what you expect and is a [[Peace Through Tyranny]] Target as well. He’s not flashy, but hits just as hard as you expect.

Is there a way to put down the rabid beast? The most direct counter is to go first and attack with a 7

or lower bot so he can’t get his Bold 2. This forces the opponent to either save him until a high cost character is available, and you have more time to set up a defense, or attack and not get full value. [[End Hostilities]] ruins his day. If he is not in an orange/black build, [[Hidden Fortification]] and [[Sparring Gear]] also help against all those Bold flips. 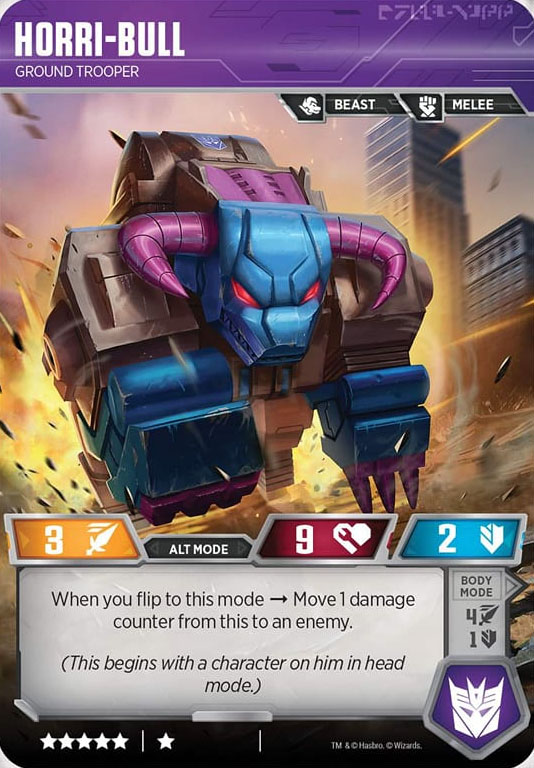 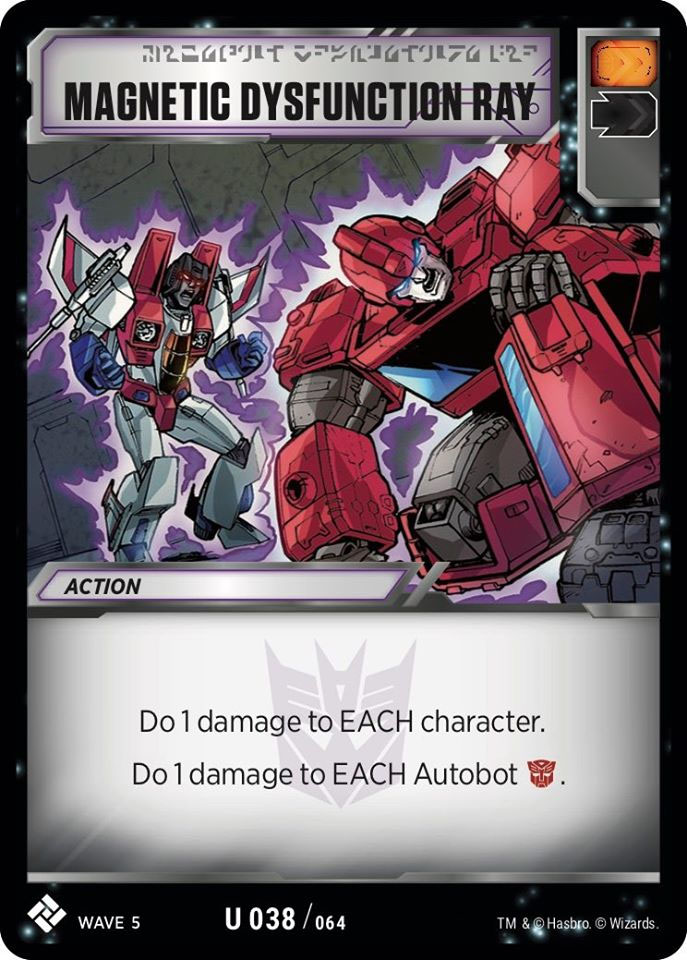 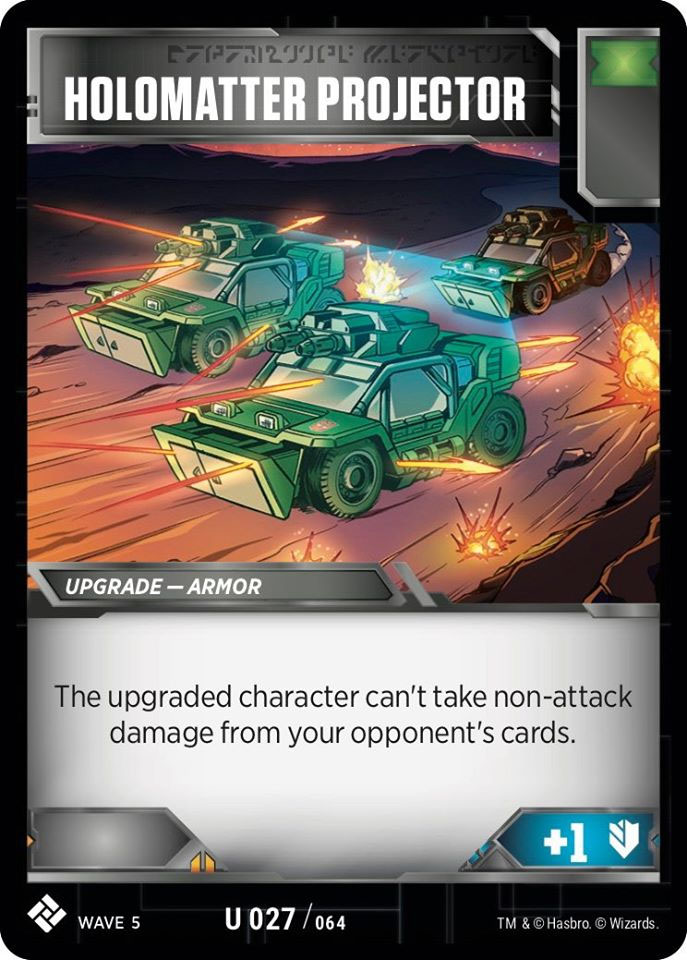 [[Horri-Bull Ground Trooper]] - You take direct damage, you take direct damage, everyone takes direct damage. The amount of damage in a well balanced Bull build is staggering. It’s not unusual to deal at least 3 damage a turn out of combat. When paired with Sky Shadow there’s a chance for 8 to an Autobot in one turn. Play a black pip weapon, play a [[Magnetic Dysfunction Ray]] that KOs a piece of your Sky Shadow to combine and bolt, and then flip Horri-Bull to alt mode. A [[Camien Crash]] turns into a better [[One Shall Stand,One Shall Fall]] with him. He is almost always paired with one of the health heads to let him stick around and fling more damage across the board.

Can we calm the raging bull? It might be time to start main decking direct damage counters. [[Holomatter Projector]] is the most splashable one with it being green pip. [[Take Cover]] may finally have it’s time to shine and [[Reflect Damage]] cans send that direct damage right back where it came from. A typical predominantly orange aggro build can also go first and smack him as hard as possible to hopefully reduce the amount of plays the Bull gets before he bites the dust. 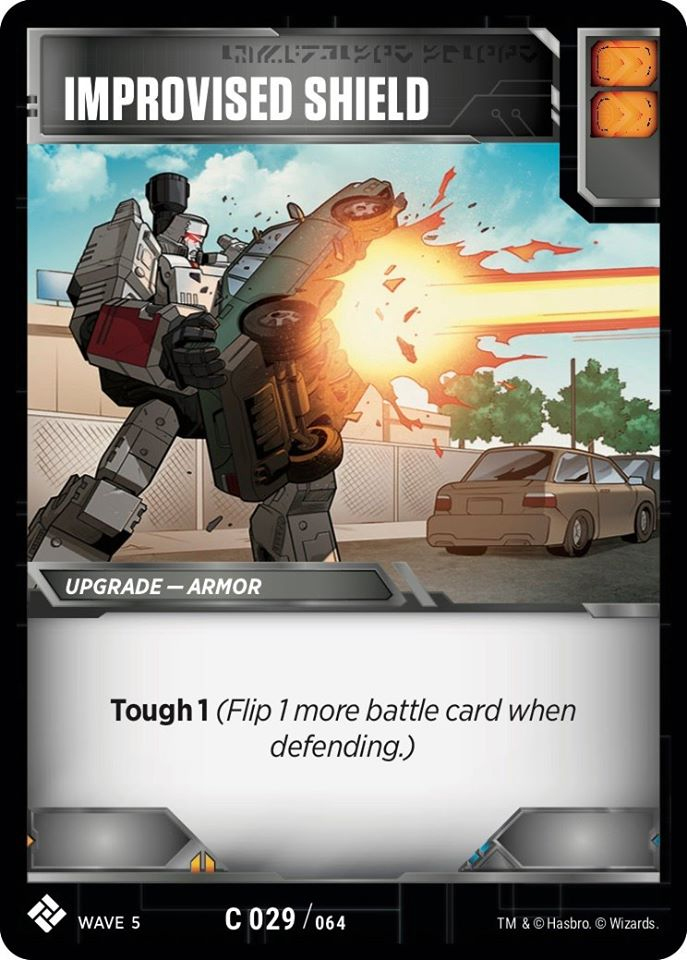 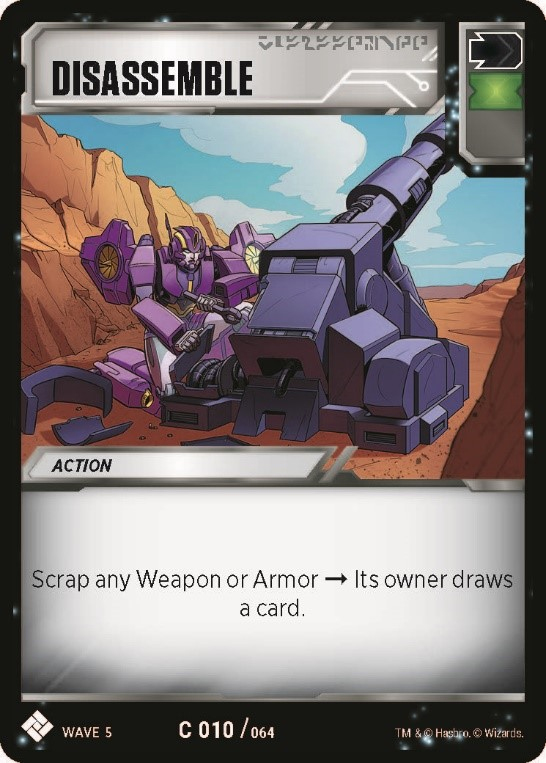 I have made a few tweaks after the last two tournaments to help with a couple of issues that crept up during my matches. I added 2 [[Improvised Shield]]. In aggro matchups a little more damage on flips felt needed to get things closer to ko out of combat with Horri-Bull. I changed from all [[Enhanced Power Cell]] and went to a 1-1 split with [[Increased Durability]]. This opens up a few interesting things like head popping off with [[Escape Capsule]] and keeping the armor. A 9 health, 5 attack [[Grax]] before playing a weapon is no laughing matter. I replaced the mainboard [[Reprocess]] with [[Disassemble]]. Utilities were not that big an issue, and often healing the opponent when getting rid of an armor was the last thing I wanted to do. I also added 2 copies of [[Wedge Formation]]. Frankly, I blanked out and forgot about this card when building the first version of the deck. It adds a little card draw and synergizes well with Horri-Bull being melee. Overall, I have two less black pip upgrades, but I believe the changes offset the potential loss of ping damage and make a more well rounded main deck.