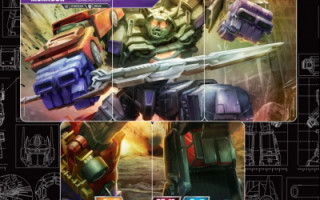 Menace the battlefield with those smash'em-up superstars, the Stunticons, in this Blue Action-oriented deck.

The Stunticons bring a few tricks to the table, offering you a novel way to interfere with your opponent while racing to combine the squad into the mighty Menasor. The head honcho is the fiendish Motormaster, who neutralizes Wars of Attrition, Calibursts, Shockwaves and other 'choose a bot' pesky ping damage in his alt mode, while constantly chucking Dead End (or other hapless Stunticons) in front of himself for protection in bot mode. True leadership, you love to see it.

Dead End is your defender of choice with this motley crew of misfits, offering a native Tough 1 and 2 defense in alt mode. You will usually want to keep Dead End in alt mode right up to Turn 5, which is the earliest you can combine Menasor. Why no Rapid Conversions, you ask? Well, Menasor can't really afford to have any dead weight once combined, and we're pushing it with a Bravery in the list! Who runs a blue deck and doesn't want Handheld Blasters? The Danger Rangers THAT'S WHO

On Bravery: don't just chuck this on Dead End and call it a day, you're better off utilizing Motormaster's pre-eminent micromanagement skills and directing your opponent's attacks yourself. Utilize Motormaster to direct damage so that big attacking swings only add 1 or 2 points of damage to Menasor's total HP by having a defender with 1 or 2 HP remaining sacrifice themselves in place of the boss. Be sure to consider how much damage you will be transferring to Menasor when deciding what order to present your Stunticons for battle - it may be worth throwing the weaker members to the wolves in order to keep Menasor as full of vim and vigor as possible!

I've left Handheld Blasters in the sideboard of the deck as I've been experimenting swapping these in and out for additional actions - Steady Shot, Calculated Strike, or maybe Stable Cover against Pierce - or even mixing in a single Green Upgrade like Pocket Processor with two of the previous cards. The Double Blue pips on Handheld Blaster in addition to those from Security Checkpoint have been my savior many times, but Menasor really hates dead draws and Handheld Blaster is nothing but Green Pip fodder in your hand 100% of the time - the Bold does nothing for Menasor without at least adding more Black pips to the deck (but then Menasor is too squishy).

Menasor NEEDS card draw. Drawing lots of cards is already a very powerful, desirable effect in TFTCG, even moreso with Menasor, who has a free Brainstorm effect every turn (Really? Menasor?). Try to use a few +Attack Actions early on to get some damage in while saving a couple of draw Actions for post-combination. Playing up to 3 cards a turn will quickly deplete your hand as Menasor, even with the Pep Talks, Battlefield Reports, and Data Banks available. Don't forget that Stunticon Enigma is a Draw 2 effect once you've combined. It can be worth it to pitch an extraneous Upgrade for the Enigma in order to keep your card draw flowing!

Note that the extra Extra Padding you get to play from dropping the first does not have to be attached to the same Transformer as the first Extra Padding - it can be more effective to spread them around if you lack a way to force attacks into Motormaster. I believe you can only transfer all three Extra Paddings to Menasor if they are stacked on one character when he combines, but I could be mistaken - I can't find rulings one way or the other. Armor is very unreliable in this meta, but every piece that sticks helps and Extra Padding is particularly stubborn to get rid of. As it is, Menasor's native Tough 1 and the carefully chosen number of White pips gives you the highest chance of getting extra Blue flips on Defense whether you have additional Tough or not.

Don't underestimate the humble Piercing Blaster; it can give Drag Strip 4 Pierce to go with his 4 Attack in bot mode, and likewise grants Menasor a total of Pierce 4 to start bashing faces with. The other Stunticons can likewise make use of it to guarantee some damage - so why only one? Extra identical weapons aren't helpful to Menasor once he combines and you'll ideally keep drawing enough cards to swap in a superior Weapon in the event of an opponent's Enforcement Batons or Vaporize.

Menasor can stack a hefty amount of damage with a few combinations of cards:

Thermal Weaponry + Calculated Strike + Leap Into Battle: Start with 12 Attack, Pierce 3, and add 1 Pierce for every Blue pip! Caps out at Pierce 10 with a flawless flip.