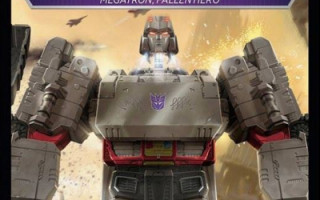 Grax goes to Megatron for a total health of 20, making Megatron very durable, and giving him a little more time to capitalize on the Revenge stratagem. Megatron can often happily attack from alt mode to enjoy the benefit of his natural 3 armor, and that little bit of direct damage from his ability.

Quake, of course, goes to bot mode as quick as he can and does further direct damage.

Battle cards are meant to be consistently high-damage (hence, the full playset of both Supercharge *and* Fight for Position, as well as cards like Belligerence, Reckless Charge, Rapid Conversion and 3 Focus Fire). Whoever is attacking, whenever they're attacking, the option should ideally be there for them to swing hard. And Revenge makes that even more reliable.

But--timing is also very important, and depends on the individual match. So, again, it's ok sometimes for Megatron to attack from alt mode, and play more of a long game. Composite Armors are in the deck, but your opponent will never let you keep them, alas. But! The effort of their playing a Bashing Shield prevents them from playing a weapon, so there's still value in trying.