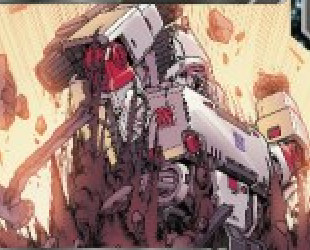 No Pips No Prob

No Pips No Prob

This deck has a shocking amount of resiliance for having little to no pips.  Skywarp's ability to give bonuses to black pips in addition to having easy access to Medic, Ready for Action, I Still Funcition and Bad Attitude helps a lot with this.  Skrapnel is tough to kill anyways so he doesn't care about blank pips or not.  Skywarp also fetches cards out of the scrap for that crucial healing or untapping.  Barricade fetches the blank cards when he battles and a simple flip gives you an extra action or upgrade play for the turn!  Now add a gyro blaster and watch your opponents really have to scratch their heads on how to kill your team when they can only flip 2 cards.

Notable Armor: Emergency Defense field really shines here as most of the time this will trigger.

Notable Utility: Gyro Blaster! you don't care what you flip cause its gonna be blank.  This makes the team hard to kill.

Turn strategy: you want to attack first.
1) flip skrapnel + attack (sidenote, you can admire how awesome your hand is cause its full of powerful cards!)  on the return they can only play one card and can only damage skrapnel for a maximum of 3.

2) flip barricade.  Give him a weapon if able.  Backup beam is fantastic as you'll get more choices of blank pip cards to nab.  This is also a great time to play a ready for action to send skrapnel again!  If not that you can try to heal using a medic.

3) flip skywarp. Give him a weapon if able.  he likes the attack drones or the Laser Launcher.  This is a great time to use bad attitude if you have it as it will possibly damage your enemies while healing yourself.  Showing off is also good to play on Barricade to cheat out the extra action or upgrade!  this leaves barricade in the correct mode so that when he battles he can steal another blank pip.  Skywarp will attack and will very likely flip a blank to pump him for +3 damage.  His Attack will be 9 with the ER launcher.

at the reset, you should have an incredible selection of blank pips to choose from in your discard and you will  most likely be down a character or hurting.  my advice for priority is:

down a character? - I still function - i've brought back skrapnel, flipped him for turn, used his ability and tapped down my opponents heavy hitter. SNEAKY.

Hope you have fun!