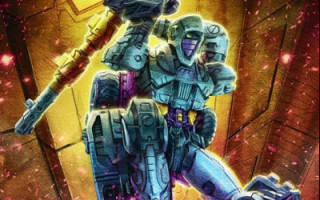 Greenlight and the Nights

Greenlight and the Nights

So, this deck doesn't hit hard at first--but that's because the team is designed to allow Greenlight's Safeguard to actually live up to its premise.

Nightracer provides the team with a sturdy scout to keep Nightbird and Motormaster from having to suffer from turn 1.

Nightbird allows for Opportune Repairs. If one of these is in hand when Greenlight is ready to fight, then she can use her Safeguard multiple times. The chippy damage from Nightbird when opponents play actions is a lot of fun. The bounty ability to play actions from an opponent's scrap pile (read: direct damage) can help the team work around the many arms of Sky Shadow.

And best of all: Greenlight's upgrades *will not* be scrapped by opponent's cards, unless you really, really want to wade out there in bot mode. This means Holomatter Projector stays, Pocket Processor (or Enhanced Power Cell) stays, and any weapon (besides Fusion Borer) stays.

The primary offensive strategy is black-icon pierce, mostly because of the synergy between Nightbird as a mercenary, and the Opportune cards. Although the damage output is minimal at first (as stated), powerhouse cards like Opportune Offensive, Fusion Borer and especially, Heat of Battle, can make up the distance quickly. Ideally, characters can untap with Nitro Boosters and Turbo Boosters, remain a wide team by the end of the round, and then allow multiple attacks in one turn with Bold 3 provided to everyone by Heat of Battle.

Haven't designed a sideboard, at least yet. Wave 1 Prowl would provide serious, built-in firepower, and is a staple in similar black-icon car decks I've experimented with, but he could only slot in for either Nightbird or Greenlight, and losing either of them would fundamentally alter the deck. To be fair, though--that's what most sideboards do...