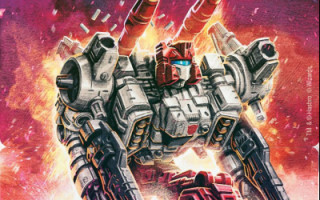 The goal of the deck is to maximize the value of [[Sergeant Six-Gun Artillery Soldier]]. It leverages cards like [[Grenade Launcher]] and [[EM24 IR Laser Launcher]] and [[Erratic Lightning]] and [[Fusion Borer]] to maximize Six-Gun's discard ability. You can use [[Treasure Hunt]] and [[Pep Talk]] to keep the weapons flowing. Note that Firedrive's weapon ability also lets you discard cards for extra attack.

The whole deck only has 29 health and 2 defense spread among 3 characters, so the deck is typically going to get 3 or 4 attacks in the match. It's not fully focused on Orange cards, there are some blue cards for defense, instead of relying of flipping Oranges, it's relying on equipping Weapons to do its damage.

Note that Six-Gun's first attack, even on a the play can come with a base of 7 or 8. That's a reasonable base for a 3-wide team. Also note that [[Quartermaster]] helps you load up your last attacks. The second ability doesn't affect Six-Gun, just the small ones, so if you draw the card, you should structure your attack to leverage the death of one of the Battle Masters.

The deck has 2 [[Energon Axe]], the right number may be 3. Also [[Armored Plating]] is directly upgradeable by [[Emergency Repair Patch]] once you've opened your Wave 5 box..