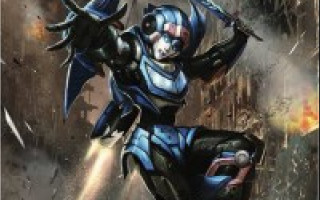 The goal of this deck is to power up [[Arcee Skilled Fighter]] with as many upgrades as possible to the point where she has the ability to 1 hit KO any bot your oponent has. Arcee doesn't have to worry about defence at all since all her damage is gurenteed. This means all she needs is enough attack equel to your opponent's health.

This deck is mostly blue to stall for enough time to power up [[Arcee Skilled Fighter]]. You idealy you want to get all three [[Extra Padding]] on [[Arcee Skilled Fighter]] before it's her turn to attack so she can survive the hit she will inevitably take when you untap since she is so britle with her 9 health. Throghout the game you want to be upgrading her as much as possible as well as [[Thrust Supersonic Interceptor]] which can add his attack value to [[Arcee Skilled Fighter]]. There are lots of ways to get multiple upgrade plays in a turn. [[Metal Detector]], [[Leap of Faith]], [[Reclaim]] and [[Incoming Transmission]] have great synergy to make it possible. All of those upgrades will make her attack increase exponentially with crude club.

The most important thing is to gurentee your attack with [[Arcee Skilled Fighter]]. [[Force Field]] is your worst enemy. There is upgrade removal in the deck and between [[Pocket Processor]], [[Equipment Enthusiast]], and [[Treasure Hunt]] you're more than likely to draw it. But if they don't have that [[Force Field]], then you're free to play your [[leap into battle]] or [[steamroll]]. Do not attack with [[Arcee Skilled Fighter]] untill you absolutely have to to maximize damage delt and minimize damage taken to her. If she goes down, this deck cannot function. Play it slow, with proper set up she can even one hit KO [[General Optimus Prime Galactic Commander]] with 26 pierce damage! Setting that up will definetly make your opponent want to scream.