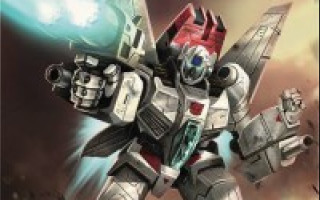 This deck is extremely fun to use. While not the most competitive at all times, it can get the job done in many situations. The idea of this deck is to start off with the given force field on Trailbreaker, transform Jetfire, and and lead off with Trailbreaker. Odds are, the force field on Trailbreaker will fall off after defending just once, making it easy for Jetfire to transform and retrieve it from the scrap pile the next turn. From there, you still have an action and an upgrade to beef up Jetfire further, and present a heavy attack, all while switching out pesky improvised shields in your hand for sweet, sweet, focus fires or bashing shields from flips. While so far, the focus of the deck has been on force field shenanigans with jetfire and trailbreaker, the real secret weopon of the deck has been slowly building up to decimate the large blue character you will be facing off against ;). Hopefully, Arcee will be able to equip a grenade launcher or erratic lightning during or kinetic intensifier whip her turn, and maybe throw in 3 focus fires for bold 6, or a supercharge if you're boring. Either way, after transforming,Arcee will laugh at any heavy blue character like shockwave who has been exposed, and wipe them from the table. After this sequence of events, it is hard to predict which character of yours your opponent will target, but using cards like treasure hunt and incoming transmission in combination with Jetfire's flip ability will allow you to stay on top of your force field game.