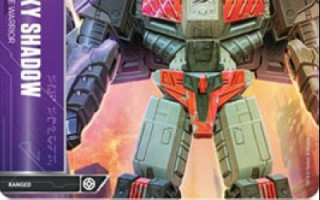 A quick mockup of what I would think a dual plane/tank deck would work with the new Sky Shadow that was revealed today. Subject to change when I think more on the deck.

Since the Head of Ominus comes in from out of the game using the strategem [[Sky Shadow Sync]] it doesn't need to be considered part of the main deck star limit.

Edit 2/28/20: Removed the 2 [[Crushing Treads]] and put in 2 [[Energy Pack]]. I've tested out many games with crushing treads and I have not found many good uses out of it. On paper the card is good, It gives an insane amount of pierce for tanks since they have a minimum of 2 defense usually. But, I found limiting it to a utility slot makes it too slow to use effectively. I will be putting in the 2 [[Energy Pack]] in order to balance out the orange pips in the deck and get some extra health on these bad boys.

Next, I removed the 2 [[Hull Down]]. After a bit of math, there just isn't enough blue pips to make the tough 4 worth it enough. Might change later with more theorycrafting. I will be adding 2 [[Belligerence]] in the mean time.