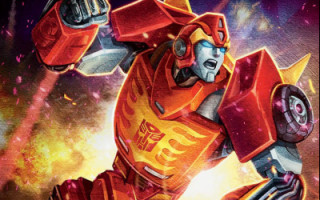 This deck can be played with the soundtrack to the 1980's movie.

Playing Dare when you take your turn with Private Hot Rod.

Pausing as you flip your OP and playing The Touch with General Optimus Prime.

And finally listening to Instruments of Destruction as Brawn goes down!

The list primarily wants you to use medic's protective fields on your OP and Brawn, while you cycle through your deck; healing with Versatilty and keeping tempo with safeguard when you can. Never keep the Lose the Initiative toss them asap; they are like your PTT (not often played, but you wanna flip it when you Versatility).

Hot Rod can do quite a bit of work once he has flipped and has a card underneath him. Try to get the holomatter armor on him as quickly as you can. If he is healthy you can stick the pocket processor on him too. When you pkay versatility, make surr you drop a supercharge or fight for position after or slap a bold weapon to get that five healing! Only play the Matrix on him if he is the only one left.

General Optimus Prime is a a beast, he can sometimes take down a whole team if played corrctly. Getting the Lucky Vest on him or Brawn is great, but a medic's protective field can help as well. He really wants the matrix anf health upgrades. Also pay attention when playing wedge formarion as optimus will have to be in bot mode to draw the card.

Brawn will most likely be first to die. So on turn one, agains't aggro; flip him to bot and attack. Keep him in alt mode against blue decks. He also loves Lucky Vest.

There is only one Sturdy Javelin due to only OP being ranged. You could easily sub in Camien Crashes/Zaps; but Id say put trip wire in; instead of Supercharges. Or even try subbing in a few energon slingshots.

The sideboard brings wave 1 kup in, and swaps out optimus prime. There are star cards that go in. Try to protect kup as he can often untap and attack again

Also if you wann play some spice swap out Brawn for Smashdown and sub in a Quartermaster!