Today I am excited to reveal one of the new stratagems being released by the Alpha Trion Protocols: Anti-Air Battery! 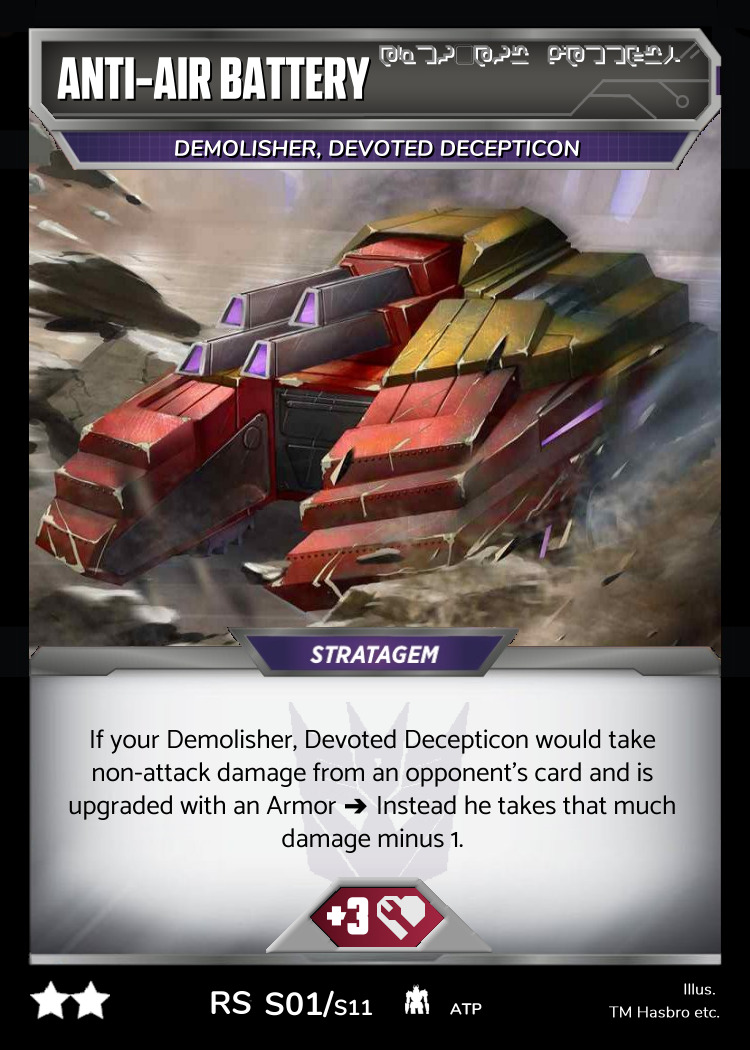 I always felt tanks in this game should be powerful, both offensively and defensively. When I first picked up the game at Gen Con 2019 and saw that tribal decks were possible, I immediately looked at the tanks and was... disappointed, to say the least. Low health across the board, lackluster abilities across many, and they just didn’t feel like powerful energon fueled war machines! [[Demolisher Devoted Decepticon]] was my favorite of the group, but he usually attacked once and then had his treads blown off, even with his high base defense. The goal with this Stratagem was to take him from one hit wonder, to a powerful destruction machine.

For a little background, I wanted to tie the card name into the lore, and Cameron at Arbitrary Hero mentioned that [[Demolisher Devoted Decepticon || Demolisher]] is usually depicted as an anti aircraft platform in the comics and media. I liked this idea but was not sure how to incorporate it thematically so it sat on the backburner during the first iterations of the stratagem.

The first test of this card read: “When [[Demolisher Devoted Decepticon || Demolisher]] has an armor attached, he gains three health”, and had a cost of one star. It felt like a nice way to emphasize playing armors on the tanks and comboed well with [[Hunker Down]]. In execution, most good tank armors (especially [[Composite Armor]] for example) fell off after use which negated the health bump. It was agreed having something tied to the armor was a good idea, as well as a small health bump, but this wasn’t the best version.

This is where having a group working on these together came into play. Richard at Transform Your Game had suggested a [[Defensive Driving]] like buff for another character that ended up not being used. I liked the idea as it fit what I was trying to do with [[Demolisher Devoted Decepticon || Demolisher]], and made sense in my mind for an anti-aircraft platform. He puts a lot of flak into the air to fight off aerial attacks and not let anybody get too close. The plus three health from the first test stratagem felt right so that was also kept.  The only issue remaining was how powerful this was, given [[Demolisher Devoted Decepticon || Demolisher]]’s continued prevalence even in this current Titan Masters Attack based metagame.  With his health and abilities seemingly well above the seven cost level, it was suggested by Scott Landis to add two stars to this Stratagem, allowing you to transform him completely and find additional homes for this new powerful incarnation of the character! This all added together gave us the final version of Anti-Air Battery.

I’m excited to see what the community can do with this new card. I hear he might even team up well with another Wave 1 tank that is getting a new stratagem.